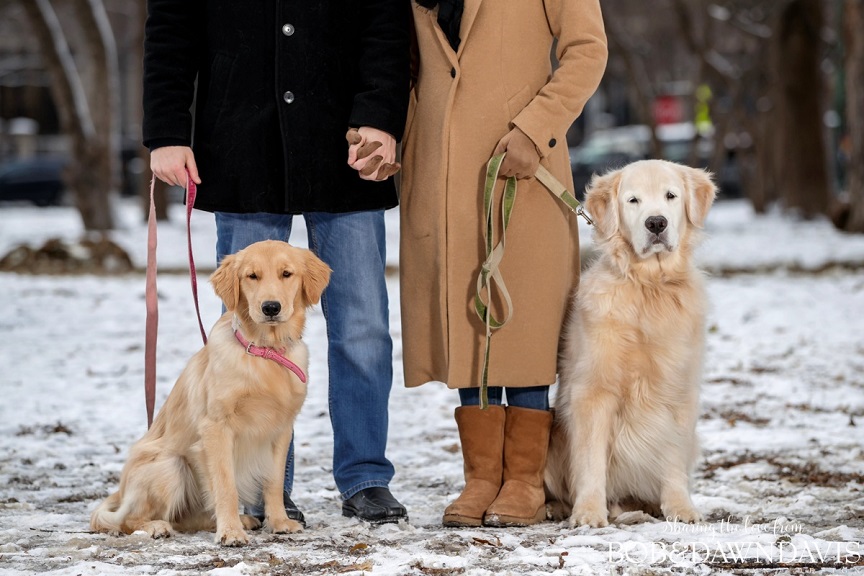 When I was contemplating bringing a second dog into the household, my biggest concern was my golden Gatsby. He was an only child for over 9 years and was generally shy amongst other dogs (especially since his vicious attack). I consulted with our dog whispers Kim and Gil, as well as Gatsby’s veterinary professionals, and everyone was in agreement that this would be a wonderful thing for Gatsby.

Our second golden Daisy has brought joy, playfulness and a renewed sense of youth into Gatsby’s life. Gatsby loves the company of his little sister and seems much more at peace when I leave the home. He is also super active now, which is great for his age, weight and chronic back condition. They love to wrestle and chase each other around the home. Although crafty Daisy always seems to allude her big brother. It is so fun to see Gatsby smiling and playing with another dog.

In fact, this development has translated into Gatsby’s relationships with other dogs. Now when Gatsby goes to the park or encounters another dog on the street he has become super friendly and approachable. Daisy has opened him up to wanting to develop other doggy relationships.

We can really learn a lot of life lessons from our doggies. Everyone has been hurt by another person or relationship, which makes it difficult to trust again. But if we do not open ourselves up to possibilities, we will be missing out on companionship and some of the best moments that life has to offer.

Overall, it has been so amazing watching Gatsby blossom. He even shares his “house,” couch and toys with Daisy. Of course, Gatsby still refuses to share his food and Momma’s homemade treats. He has a big appetite after all!

If anyone is contemplating bringing a second dog into the household as a companion for their senior dog, I highly recommend it. Of course, be sure to consult with your designated professionals and do some research regarding the best fit for your pup. It was recommended to me that a female golden would be the best match for Gatsby given his background and temperament. We also introduced Gatsby and Daisy to each other in a neutral environment before we brought Daisy into the home. As it turns out, Daisy was a perfect fit for our “Prince.”

Struggling with maintaining a healthy lifestyle? Want a friend to accompany you on your wellness journey? Wish it could be less work and more fun? It can! And that it doesn’t have to be so hard! Sign up to be a part of the Rockstar Doggy Momma community where you will have the support and encouragement you need to succeed, feel less alone, and follow a simple, efficient plan that keeps you on track. And the best part? You get to do it with your best friend: your beloved dog! What could be more fun than that?